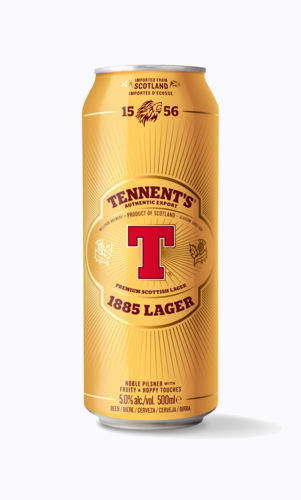 The Tennent family started brewing beer back in 1556, Hugh Tennent inheriting the Tennent family's Wellpark Brewery in 1884. In 1885, he went to Bavaria and after his returning decided to brew his own Scottish Lager. What many called the "madman's Dream" brought Hugh a huge success. Scots, who were used to consume darker varieties at the time, liked the light lager, and Tennents won their hearts quickly. From now on, every second pint of lager sold in Scotland is a pint of Tennents. Tennents has a beautiful golden color and thick snow-white foam settling on the walls of the glass. The soft malt aroma with light fruit and hop hints makes every sip of Tennents unforgettable. It is recommended to cool for 2 hours in a refrigerator before serving.