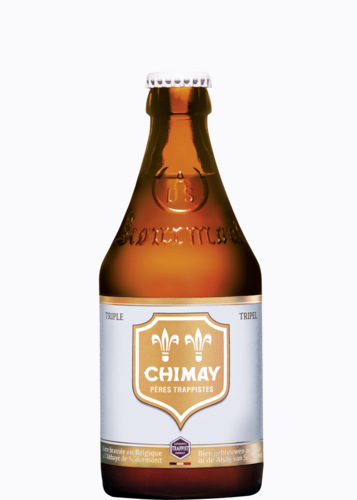 In 1862, the monks of the Belgium trappist abbey Scourmont brewed their very first beer, known today as the Chimay ‘Premiere’ (75 cl), respecting the monastic traditions of natural brewing and top fermentation followed by refermentation in the bottle. Chimay beer is brewed under the supervision of the monks on site at the abbey, which guarantees its authenticity and quality. It is bottled at Baileux, a few kilometres from the Abbey. Chimay Trappist beers are produced and distributed by the company Bieres de Chimay. Chimay is neither filtered nor pasteurized. Chimay Triple — is an unfiltered and unpasteurized top fermented beer. Aroma of Chimay — this interweaving smells of fresh hops, with notes of fruit, nutmeg and raisins. Bouquet of beer best revealed at a temperature of 6 to 8°C. It is brewed under the strict supervision of Trappist monks of the Order, according to the original recipe, which has never changed since the XIX. Main feature - CHIMAY beer is re-fermented in the bottle. This is due to the fact that before leaving the monastery in a sugar and a special yeast. To ensure the perfect quality of the beer, it is placed in a warm maturation cellar , which is equipped with four air tubes. The tubes carry out a constant circulation of warm air (24°C) and moisture from the floor to the ceiling. This process takes 21 days.